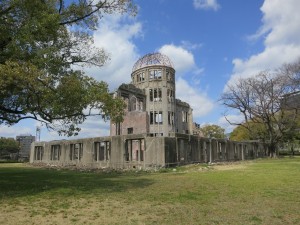 To satisfy the history buff within, we went for a day trip to Hiroshima, to visit the incredible museum dedicated to the memory of those who died from the world’s first use of the atomic bomb on the city in August 1945. It is an extremely moving and insightful place, and I cannot recommend the visit highly enough. The Hiroshima Peace Memorial Museum is set in a beautiful park land built on an island that was levelled by the bomb.

The whole experience is very humbling, and really gives you a sense of fear when you discover that while that one bomb could kill 200,000 people, the world remains in possession of bombs that are several orders of magnitude more powerful.

The bomb, ironically dubbed ‘Little Boy’, caused supersonic winds, torched the earth to 5,000°C, and if that didn’t knock the buildings over, the resulting fires would have.

It was interesting to note that the museum did not take sides or point blame, merely presenting facts in a very cautiously objective manner. 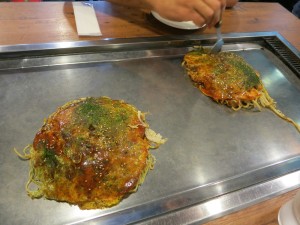 Delicious modern Okonomiyaki - noodles, pork, veges with an egg cracked over the top

After all the learning in Hiroshima, what better way to cap it off than with an Asahi and okonomiyaki  – noodles, pork, egg and vegetables served as a round portion that comes in somewhere between a pizza and an omelette. Very delicious! Some places even let you prepare it yourself at the table.