Kyoto is an amazing place, a city of incredible contrast. It is so easy to stumble in a very short space from the cherry blossoms blooming in the spacious Imperial Palace Gardens, to the wealthy downtown shopping precinct, and onward across the Kamo River to the traditional Gion geisha district. So, it is not hard to see why the city becomes such a black hole for tourists, and I dare say, the Florence of Asia. But while it was a place that catered well for foreigners, it thankfully did not seem overrun with them.

Two things stood out as being very commonplace throughout the city. Firstly, there are marks of wealth everywhere – high-end department stores, expensive cars, impressive streetscaping and inestimable numbers of classy restaurants. It all said, in no uncertain terms, Kyoto is very affluent. Secondly, there is an incredibly strong French influence in the town, for reasons unbeknownst to me. Scenes like that in the picture to the right would have you second guessing if you actually were in Japan.

Unfortunately, I only had a full day to explore the city, so had to do the best I could to see what I could.

Our first port of call was the heart of the downtown shopping precinct, Teramachi-dori. This street, and numerous side streets constitute the main shopping area for the city. Despite the plethora of cultural attractions nearby, the allure of the neon lights, exciting displays and gimmicky music dragged us to the arcade to indulge in some good old fashioned games.

Well, not old fashioned at all really.

Japan really is at the forefront of arcade gaming, and the machines you see at Timezone really seem to be the leftover scraps. And the most amazing thing is, the skill tester machines not only actually allow you to win something, but they are also designed to reward persistence. I won a remote control trolley on my third go – total cost 600 yen ($7). 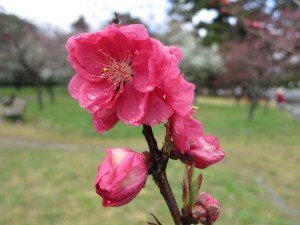 We came for the cherry blossoms. And we found them. Unfortunately, because of a colder than average winter, they were not in full bloom as expected, but there were enough buds amongst the odd bloomed flower to provide a scintillating array of pink and white.

As for the palaces themselves, not much you can see when it’s hidden behind a tall wall.

I was intrigued by the design of the castle, every room received natural sunlight and fronted a veranda. Rooms were laid out in squares, and all fronted a veranda with views of a tastefully arranged garden. The best part was, the castle was surrounded by a moat, does it get any better?

Sham was in search of a barbecue dinner, Korean-style, so we ended up at a place that achieved that, with a Japanese flair. He took the waiters suggestion and dropped 5,000 yen ($60) on a piece of stage that would be barely 100 grams, seemingly without realising the attached price tag. Suffice to say, it was delicious.

However, the novelty of cook-it-yourself wore off pretty quickly as the total bill approached an ichiman (10,000 yen, $120) making it the most expensive meal of the trip so far, and to earn our money, all they had to do was bring us tiny portions of meat! Sadly, the portions were so small, we had to visit a fast food restaurant on the way home to fill up on burgers.

Gion is the cultural epicentre of Kyoto. By night, this is where all the action happens, where the restaurants mix with the geisha girls. The streets buzz until late; women in kimonos walk the streets alongside drunken businessmen and fully made-up club-goers. Illuminated lanterns line the busy streets.

But by far and away, the best was saved until last. Shimbachi-dori, said by some to be one of the most beautiful streets in Japan, and indeed Asia. I’ll let the pictures speak for themselves.

Shimbashi-dori - apparently the most beautiful street in Japan