Weary after my overnight flight from Milan (mental note: never travelling around the world eastbound again), I collected my bags and made tracks for Hong Kong Island, and boarded one of the islands famous double decker trams for my accommodation. Boy, was that a challenge. There was no shortage of obstacles to get in my way, from the sneaky stairs that are steeper than they appear to the locals transporting all manner of goods in the aisle of the tram. Fear not, for by now I was an intrepid traveller, well accustomed to the challenges of manoeuvring my rolling life behind me.

Once I’d delivered my belongings to the hotel, I made a bee-line past the Unicorn Trade Centre for the less imaginatively titled Mid-Levels Escalators. This is apparently the world largest outdoor escalator system, transporting people up to 130 metres in elevation up the hill.  I was intrigued by the idea of using escalators as a means of public transport, which allowed people to effortlessly climb and descend the very steep cliff faces of Hong Kong Island. The sheer presence of the escalators had unlocked new entertainment districts along the ascension to the top, not surprisingly entitled the mid-levels. 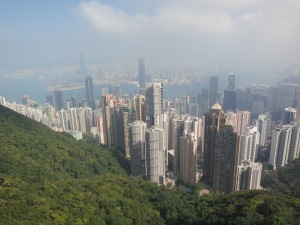 View from the top

After a short trip up the dizzyingly steep funicular to the Victoria Peak, I spent a good afternoon of time in the afternoon admiring the incredible architecture, the busy hum of the islands shopping centres, and the never-ending stream of people going about their daily business. Hong Kong is one of the tourist and business hotspots of East Asia, but the sheer density of people in such a small space means this is very easy to forget.

Unfortunately, my trip was disrupted by a handover by my new boss. He informed me he was leaving on his period of leave before I returned, and I was suddenly in charge of a brand new team, with someone I’d never worked with before, and a fresh graduate engineer who hadn’t previously worked in the field. Supposedly, I owed him two hours of my time. It was now that my holiday delusions have suddenly been replaced by the realisation that in just a couple of days, I would be back at work.

I left the hotel and travelled to Central where I met a friend from high school Karmen, and her partner Ashton, who had moved to Hong Kong some time ago. After meeting for an inexpensive cocktail at a hole-in-the-wall bar, she escorted me to Causeway Bay where we dined at a local restaurant for some of the most delicious Chinese I’d ever been privileged to enjoy. I re-joined Ashton the next day, for a zippy tour of Kowloon’s hotspots, from the frenetic street markets, to the dazzlingly humongous shopping malls.

On my last day, I skipped the relatively juvenile Disneyland and hopped on the bus for Ocean Park, a home-grown theme park set atop the cliffs of Hong Kong Island, with amazing vistas of the South China Sea; think Taronga Park crossed with Dreamworld. I had a craving – a craving for rollercoaster. So I went in search of the most thrilling rollercoaster I could find, and smelled the great scent of success, and salty sea air, at the Hair Raiser. Four inversions, million dollar views, and a phenomenal ride.

It was a fitting end to a most amazing 68 day journey around the world. The whole trip zipped by, seemingly, just as quickly as the 60 second rollercoaster ride that concluded it.