Buenos Aires is a beautiful city. Nowhere I have been so far has matched the vibe, the colour, the nightlife, and the pizazz of the Argentinean capital.

Argentines seem to have developed a reputation for being rude to foreigners, and while you could sense them throwing their hands up in the air every time something seemed slightly too difficult. But as I found, this represented only a minority of Argentines. With the exception of a few merchants, the people I encountered on the street are not like this, they were helpful, patient with my poor español, and most of all, friendly.

I stayed right in the centre of the city, half a block from Avenida 9 de Julio, the widest street in the world. The main artery through the city, it is up to 18 lanes wide in parts. 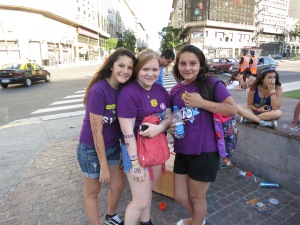 Just another day in the life of a few porteñitas

The porteños, as the locals are known, have taken a very Mediterranean approach to life. Many restaurants do not open for dinner until 9pm, and really don’t get busy until shortly before midnight. Nightclubs don’t tend to get busy until 2am in the morning, and locals tend to have an evening nap before heading out on the town. I really don’t understand why they operate this way, don’t they value their sleep?

Having said that, being the middle of summer I am enjoying the 8:30pm sunsets and the long days of exploration this permits.

On my first day there, I visited the neighbourhood of Palermo and undertook a Foto Ruta tour, where in groups of a couple of people we went out and got a nudge in the right direction of where to capture some fascinating street scenes. It is also when we discovered that the porteños are not at all camera shy, with most happy to pose for the camera when asked in our broken language. A few examples of the photos that the group took can be seen here.

To get out to the barrios, I made large use of the local metro, known as the Subte, short for subterranean. One (so far) unique thing about the Subte amongst metros I have travelled upon, is there seems to be a quite literal underground economy on the trains. Every couple of stops, a merchant will walk around placing an item for sale on the lap of all the seated passengers, all with a green sticker marked with the price. After you had a moment to analyse the product on offer, he would walk back down the carriage. If you didn’t want it, you simply returned the item, but if you did, you simply paid the advertised price. I couldn’t work out if this was all sanctioned by the transport authority or not, but there was a scary uniformity in the way this system operated. I was variously offered children’s books, chocolate bars, city maps, reading night lights and little plastic ticket sleeves, among many other products, all dispensed in exactly the same way, with exactly the same little green price stickers.

I visited the Recoleta Cemetery, a surreal landscape of larger-than-life burial plots. It seems that each wealthy deceased inhabitant has tried to out do every other wealthy deceased inhabitant by constructing an even larger edifice than the last. As a result, you walk around and can’t help but feel overwhelmed by death. One such tomb belongs to Argentina’s favourite woman, Eva Perón. The porteños affectionately prefer to call her Evita, making good use of the Spanish grammatical method of adding -ito (for men) or -ita (for women) to the end of any given noun to make it seem smaller and cuter. Regardless, I still haven’t worked out why she is so popular. Perhaps it is something I will never understand.

Thankfully, the feeling of death ends as soon as you walk out the door, so on the recommendation of a fellow traveller on the previous days photography tour, I went to the zoological gardens. But instead, I found a protest by some vegetablists, complaining about the treatment of zoo animals. 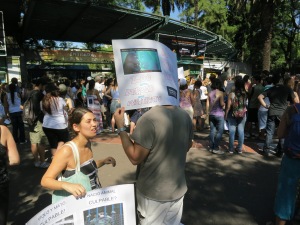 In the dark of night they had vandalised the zoo entrance, ripping down signs and spray painting the walls with various messages. And during the day, they were all outside with placards trying to intimidate prospective zoo-goers into not visiting the zoo. Oh how wrong they were, I was more determined than ever to visit. If it was as bad as they made out, I wanted to be outrage. I want to see this mistreatment for myself, pay 60 pesos ($13) for the privilege  and then join the screaming chorus outside. So I battled my way through the crowds, paid the entrance fee and went in.

Disappointingly (for me, not for the animals), it was much like every other zoo. I found the giraffes, admired them for a bit, walked around the rest, and left.

This meant I got to spend the remainder of the afternoon relaxing and just simply enjoying the atmosphere.  The weather was just beautiful. 28 degrees, low humidity, and on Sunday, not a cloud in the sky. It was muy tranquilo. I just felt my time here was too short, and before long I was on the move again. I will definitely be back. 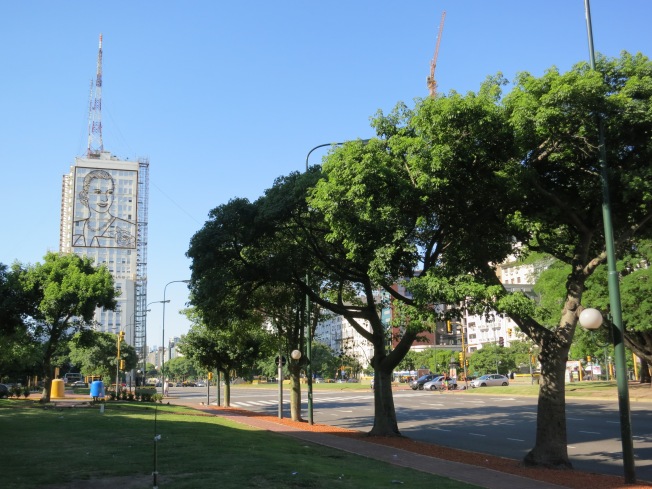