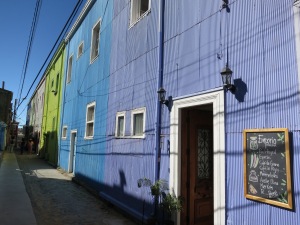 Variety is the spice of life – even with colours

From the beginning of the planning of this trip, I had always envisaged that I would end the South American portion of my trip with a visit to the beach for a few days of rest and relaxation. I picked a small community called Reñaca, just a few kilometres north of the twin cities of Viña del Mar and Valparaíso. I thought I had picked very well, when I arrived at my accommodation, resting on a small escarpment a couple of blocks back from the beach, with panoramic views of the city, the coastline and Oceano Pacifico, just 300 metres from the centre of town, and at a dirt cheap price.

I was very excited, so at 5pm on the day I arrived, I excitedly bounded down to the beach for a swim. As soon as I dipped my toes in the water, a nerve-jangling tingle shot through my body. My body motioned in involuntary spasms, forcing me to recoil out of the water. I realised I had made a rookie error. The water was unbearably cold, around 13°C, and amid the 32°C air temperatures, it felt like an electric shock the moment it came into contact with my skin. 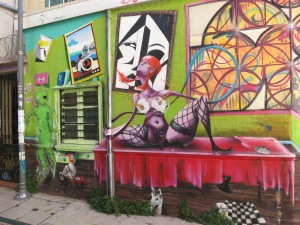 I wondered why it was so cold, and was later told it has to do with the oceanic currents. Here, the water circles the South Pacific in a counter clockwise direction, bringing up along the Chilean coast cold polar water. Amid further research, I discovered that this is a problem on the west coast of every continent.

Nevertheless, I laid on the beach for an hour or so, realising that while the beach was there and very popular, the water was completely useless. This disappointed me.

The next day, I slept in, and went for a daytrip down to Valpo, as the locals call it. Valparaíso is an old port city, famous for it’s colourful architecture, fascinating hilltop suburbs, and amazing artwork on the side of their houses either painted by the residents themselves, or commissioned to be painted by others. I was lucky enough to witness one being painted on the wall of a residence. “¿Permiso un foto?,” I ask, putting my poor grasp of Spanish grammar on full display as I ask if they would allow me a picture. They were happy to oblige. 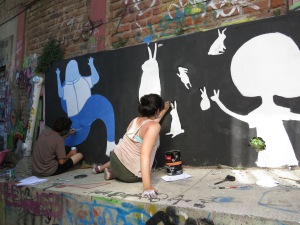 It is not a great distance from the water’s edge to the foothills, barely a few hundred metres, and the CBD expands along the coastline. Funiculars are the primary mode of transport to these barrios from the commercial city centre. In a small way, it is kind of like Wellington, with a few dozen more funiculars, and about 400,000 fewer New Zealanders.

No guesses where the inspiration for this café name comes from

While in Valpo, I chanced upon the second best coffee I have had on the continent. It was at a little café called Melbourne Café, owned by an enthusiastic Australian and Melbourne AFC supporter, who has no qualms about sharing his love of Australian Rules football with the completely clueless locals. But I am noticing a trend, the best coffees I have overseas always seem to be at places owned by Australians. Maybe I’m doing this wrong.

But there was one thing I very much enjoyed about my beachside escape, that reminded me of something I miss about living on the west coast. The sunsets, simply glorious.

View from the accommodation